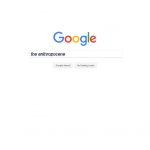 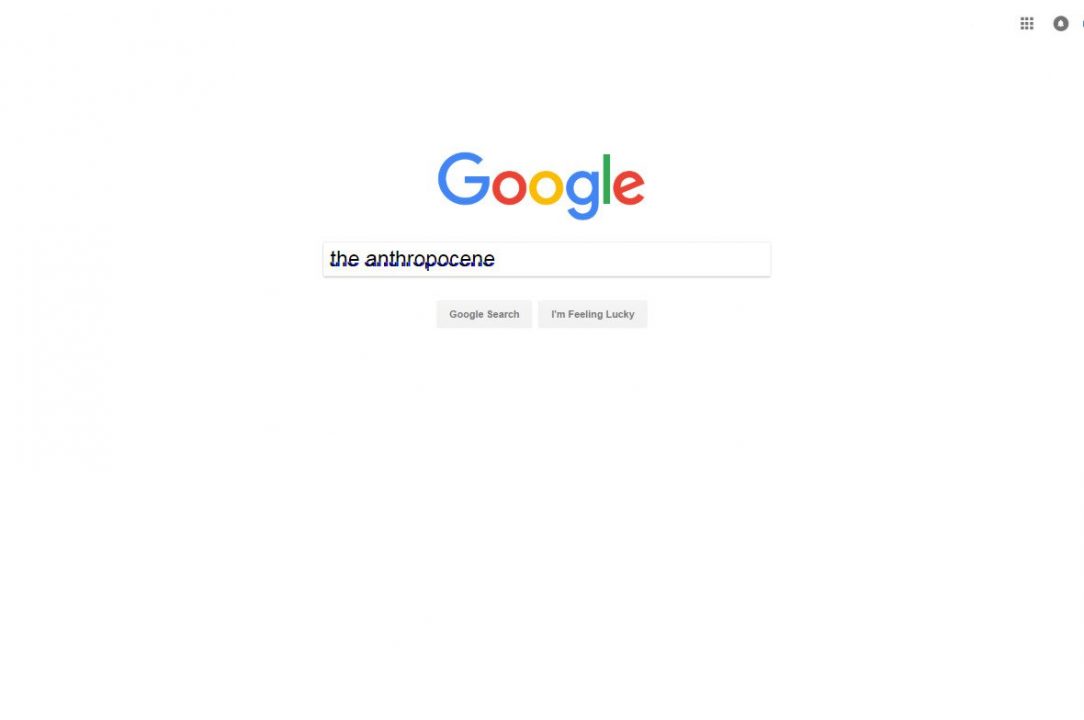 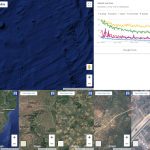 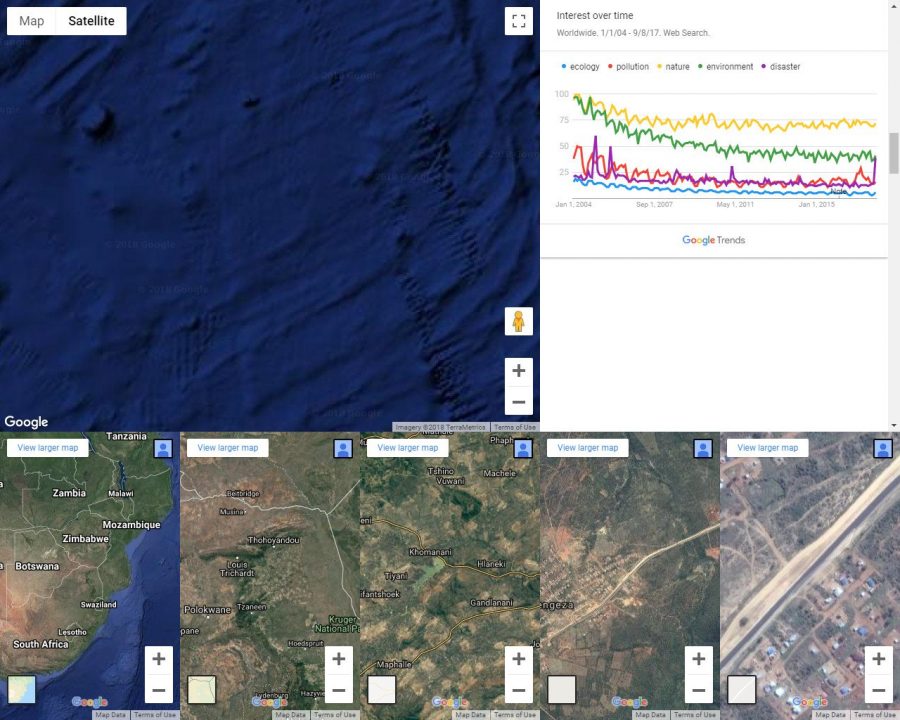 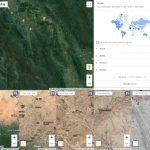 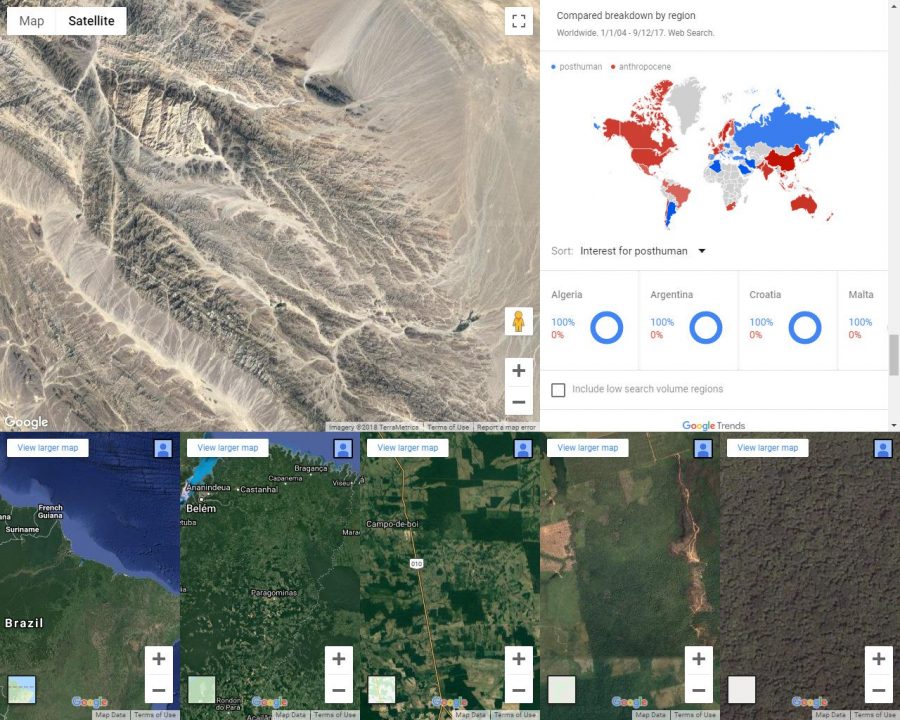 The scars of humanity can be seen across the Earth. However, observing such ecological violence often requires the right perspective. At every scale, humans make their mark, expressions of the rapid expansion of creative and destructive collective consciousness. This process is aided by technology, from the history of written language that enabled larger settlements and the agricultural revolution to contemporary computer technologies that create an alternative hyperspace within the Earth. The Anthropocene represents the idealisation of material reality by the subjective intentionality of human creation and destruction. It is the virtualisation of ecology, a disruption through the inclusion and impact of humanity. Thus we require new, posthuman modes of viewing ecology in relation to humanity in the Anthropocene. Enter Google – the ultimate virtualisation of the universe, not merely its digitisation but also its embedding within the global collective human consciousness via digital technology. Just as there persists the dilemma of needing technology to view the effects of technology, so does Google as a company embody this tension in the problematic relationship between startup ideals, marketing rhetoric, and the needs of a multinational corporation. However, through Google’s tools – such as Maps, Earth, Streetview – we can adopt new forms of viewing our ecological situation by breaking free of our conventional human position. These post-human perspectives allow for spatiotemporal detachment from the Anthropocene and therefore a position from which to rethink the future, recapturing a reality without humans. However, we must remain mindful of the mediating technologies that entwine our histories and futures in relation to the planet.

This work exposes these frameworks of mediation through its presentation within specific frames. These are literal, technical frames – loaded in html iframes using javascript and the Google API – as well as metaphorical frames – built upon the constraints of the work. The spectator can attempt to manipulate their perspective, to take control of how they are viewing the Earth through Google interfaces, but the work itself constrains this. The windows appear only for limited periods of time, too short to allow full interactivity. Thus, while we are exposed to views beyond our normal individual human grasp of the world, we are also manipulated in the external and automated control of our usual access to information provided by Google. This process not only highlights the limits of post-humanity by its technologies, but the bombardment of changing views demonstrates the volume of data available and the sheer scale of views necessary to comprehend the Anthropocene as a whole. The entangled and embedded nature of individual humans, mediating technological structures, and corporations such as Google unveils itself in the breaking down of the work. Sooner or later, systems crash, connections get overloaded, and the metaphorical frameworks we construct are revealed as the human constructs they are. While we can stage post-human technical demonstrations, to attain a truly post-human perspective would be to transcend the current limits of our individual and collective, technocultural and biopolitical structures, motives and responses.

I am a postdoctoral researcher at Solent University. My research spans cultural theory and creative media practice, focusing on the relation between humans and (digital) technology. My work emphasises the future of society, whether that be distant or imminent, in order to inform our understanding of the present.

I previously worked for the Birmingham Centre for Cyber Security and Privacy, and before that received my PhD in Digital Technology Theory and Practice from the University of Wolverhampton for a thesis on The Cyborg Subject. Before my doctoral work, I was a member of the Birmingham ElectroAcoustic Sound Theatre following my Bachelor’s and Master’s degrees at Birmingham. Research interests include: media theory, digital culture, privacy, posthumanism, utopia, science fiction, computer games, digital art, literature, psychoanalysis, quantum physics.

My creative media practice operates in dialogue with my theoretical work. This is often in the style of a productive antagonism, each mode of thinking bringing out challenges to and questions for the other. My work includes web-based media, computer-generated images/film/sound, interactive and game-based works, augmented reality, and avatars.